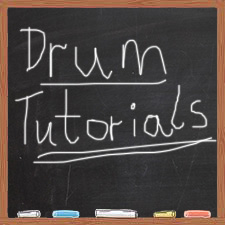 John Bonham was a master at applying triplet patterns all around the kit to create monstrous drum fills. One of the best examples of this intense triplet fill is found just after the guitar solo on the song "Dazed and Confused" from the band's self-titled debut album. It's one of John's most influential licks that has been imitated time and time again by the many drummers he's insprired.

Bonham's explosive drum triplets around the kit became one of his tradmarks:

Let's first dissect the triplet rhythm into its simplest form - restricting the drums used to just the snare drum and bass drum whilst maintaining the rhythm. So we are playing triplets with the first 2 beats played by the hands, leading with the left hand, and the third beat played on the bass drum. Try to play the triplets as evenly as possible. Learning this pattern will get you the coordination you need between your hands and feet to move onto the next step.

The next step is to vary the drums played on the first two beats of each set of triplets helping you achieve independent coordination between your hands and feet. So here we are going to play:

So up until this point we have learnt:

WARNING: Step four will be one of the most memorable drumming moments of your life when it is first successfully carried out... After all this hard work you have put in, you will now be rewarded by playing the complete drum triplet passage and feeling like a god! HA:

If this tutorial has been helpful: why not support johnbonham.co.uk by sharing it with friends!